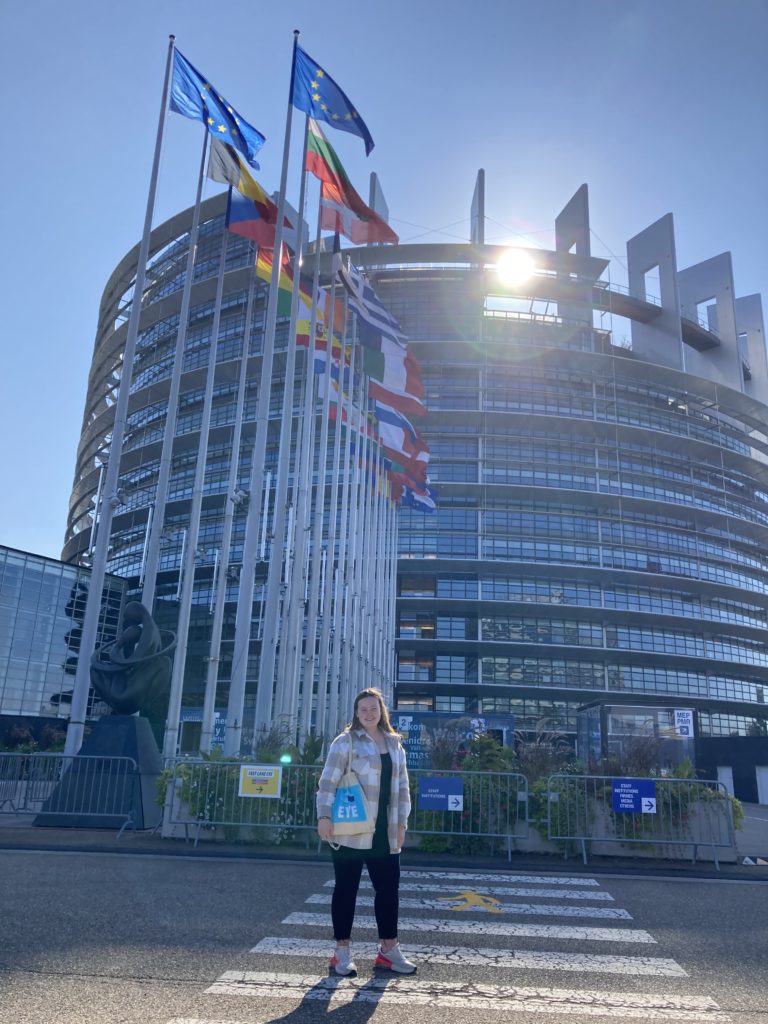 Tara Toye, a sixth year student from Deele College in Raphoe recently spent time in Strasbourg as part of the European Youth Event.  She was part of a nineteen team delegation, who were challenged to ‘create change’ in the world. In this article, Tara gives an account of her time at the international event.

“The European Youth Event (EYE) is the biggest event for young people in all of Europe. This year the EYE brought over 10,000 young people together in Strasbourg to learn more about activism and to share their  thoughts and ideas surrounding youth involvement in politics and changemaking, on a local, national and international level.

I attended the EYE as a delegate from the Organising Bureau of European School Student Unions (OBESSU) through their project European Change Makers Academy (ECMA). Our delegation was composed of 19 young people from Europe, who have experience in change making. We had identified the skills needed and the steps to be taken when creating change and our aim was to share this with other young people, who wanted to become involved in activism, through our activity ‘Next Gen Changemakers’.

I got involved with ECMA through my participation in the Irish Second-level Students’ Union (ISSU). ISSU is the national representative body for students in Ireland. ISSU works to represent, uplift, and defend student voice on a national level, and gives students the space to voice their opinions. Being involved with the ISSU has given me many opportunities, including attending EYE, and has taught me countless skills.

Being a student activist has been the best decision I could have made, however, like everything, at times it can be overwhelming especially alongside school work. Attending events like EYE and meeting people from all over Europe, with the same interests, and sharing ideas, is the best reward and form of motivation.

The EYE had activities to interest everyone from being in the shoes of an MEP, to playing soccer blindfolded. We got the chance to explore the European Parliament building and to see Strasbourg city.

This was honestly such an amazing experience to get the opportunity to see the different ideas from everywhere in Europe! The skills that I learned and the young people from Europe that I got to meet is unlike anything I had expected from this event. The EYE reinforced that young people have opinions, and that we deserve to be heard, respected and seen as equals at the decision making table.”

School principal, Mr Joe Boyle says that Tara’s selection on the European team highlights her activism and her ability to stand up for the rights of others.

“Tara has played an integral part in the life of Deele College over the past six years and she has had such a positive influence on promoting the views of students not just in our school, but students across the country.

“I am delighted that she has been given this opportunity and I know that in the years to come, this experience will be invaluable as she moves through her chosen career path. We at Deele College are immensely proud of what she has achieved and her recognition is well deserved.

This website uses cookies to improve your experience while you navigate through the website. Out of these, the cookies that are categorized as necessary are stored on your browser as they are essential for the working of basic functionalities of the website. We also use third-party cookies that help us analyze and understand how you use this website. These cookies will be stored in your browser only with your consent. You also have the option to opt-out of these cookies. But opting out of some of these cookies may affect your browsing experience.
Necessary Always Enabled
Necessary cookies are absolutely essential for the website to function properly. This category only includes cookies that ensures basic functionalities and security features of the website. These cookies do not store any personal information.
Non-necessary
Any cookies that may not be particularly necessary for the website to function and is used specifically to collect user personal data via analytics, ads, other embedded contents are termed as non-necessary cookies. It is mandatory to procure user consent prior to running these cookies on your website.
SAVE & ACCEPT